Apple Pay Adoption as a Payment Method at Spreedly 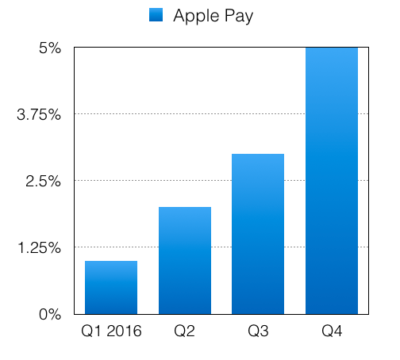 Apple Pay launched with great fanfare on September 9, 2014. As is often the case with big new technology announcements, actual usage takes longer than the initial public interest would seem to indicate.

So, we thought now was a good time to take a look and see what adoption looks like for Apple Pay as a payment method at Spreedly.

Spreedly customers using Apple Pay has been slower than you might think. However, there are good reasons for this. Apple Pay is still heavily skewed toward one time use and mobile apps. This means it's not going to be that appealing to many of our customers because our value proposition is more around storing a payment method for subsequent charging.

Still, the good news is, the trend is in the right direction.

First of all, here's the percentage of applicable (US) Spreedly customers using ApplePay over four quarters of last year, 2016:

When it comes to the different types of payment methods used at Spreedly, the majority of customers are only accepting credit cards. For those that are accepting non credit card payment methods, however, the choices are PayPal, Bank Account, Apple Pay and Android Pay.

When looking at only those customers accepting non credit card payment methods, we can see the following share of each of the 4 choices in use (as of December, 2016):

Bank Accounts is still our most popular non credit card payment methods, with PayPal close behind. Apple Pay is making up ground though, having started the year closer to Android Pay's 3%. Meanwhile, Android Pay is yet to make any sort of real impact.

Apple Pay as a Percentage of All Transactions

Now, let's look at those customers using Apple Pay as a percentage of their total number of transactions on Spreedly. How is the mix changing over time?

After moving quickly to under 5% from March to June, transactions stayed fairly steady throughout the year. However, there was a noticeable spike in December usage. This bodes well for 2017.

It's worth noting that some very small Spreedly customers are seeing close to 30%-40% of their transactions as Apple Pay, but their transaction volumes were too small to swing the overall averages very much.

The most important metric we can't speak to here is conversion rate - we don't have visibility into the end-to-end flow for our customers in their mobile app. Anecdotally, customers that do use Apple Pay talk enthusiastically about higher conversion rates than credit card payments - a great sign for increased adoption going forward.

One final observation. As we head into 2017, Android Pay feels like where Apple Pay was 12 months ago, and Apple Pay appears to be growing slowly but steadily. With the ever increasing number of iPhone's able to accept Apple Pay, along with the introduction of support for Apple Pay in the Safari web browser, it'll be interesting to see how that ever increasing market of Apple Pay enabled users impacts overall Apple Pay share of transactions.

Click here to read our comprehensive guide to local and alternative payment Methods!